I am a HUGE All My Children fan. I used to make my college schedule around it and I always set the DVR to record it. I was so bummed when they canceled the show. I felt there was so much more to tell and they had to cut it short. I had just started to fall in love with the Hubbord family. Greenlee was back and things were getting steamy all over! I was so disappointed in the last show. I felt it didn’t really give me closure. Well I no longer have to be sad that I can’t watch new episodes of All My Children. Hulu has brought All My Children and One Life to Live BACK! Yes that’s right they are back with NEW episodes. 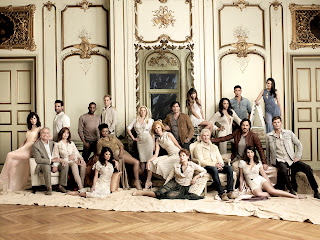 Hulu will be premiering the shows today Monday, April 29th at Midnight! They are also available on Hulu+ and iTunes for on-the-going viewing. And since the shows are not on network television it is going to be steamier than ever! More “adult” content. This will not be our daytime drama’s we are used too. No longer can we watch with our little ones in the room. Hulu has turned our shows into adult time! So take a little time for yourself and catch up on your favorites. I know I am super excited to take some “mommy” time and check out All My Children!

Here’s some important links for all you AMC and OLTL fanatics!

Here’s a teaser for AMC and OLTL

OLTL
I am very excited for AMC to start! Here are the links for previews for the shows.
So now just in case you have forgotten what each show is about I have a little recap below. But before we get to that I just want to let you know there will be new episodes every weekday (only a half hour in lieu of an hour) with a recap on Fridays.
All My Children
Show synopsis
All My Children revolves around the lives of the residents of fictional Pine Valley. For nearly forty years, this town has seen the trials and tribulations of its dynamic families. Now your favorite stories are back, and more dramatic than ever!

Plot outline
The good people of Llanview, Pennsylvania, lead complicated lives. In a town of questionable marriage ethics, teenagers grow up fast and fall in love quickly. The quiet simplicity of small-town living on the Llantano River is frequently upset by an over-abundance of multiple personalities who disturb the peace. Despite the jealousy, betrayal, and occasional baby-swapping, Llanview is where the Buchanan, Lord, and Cramer families struggle to retain the strong family ties that have always united them.
One Life to Live actors include Corbin Bleu as Jeffery King as well as returning actors Erika Slezak as Victoria Lord Buchanan, Robin Strasser as Dorian Lord, Tuc Watkins as David Vickers, Robert S. Woods as Bo Buchanan, Kassie DePaiva as Blair Cramer, Jerry verDorn as Clint Buchanan, Florencia Lozano as Tea Delgado, Melissa Archer as Natalie Buchanan Banks, Hillary B. Smith as Nora Buchanan, Kelley Missal as Danielle Manning, Josh Kelly as Cutter Wentworth, and Andrew Trischitta as Jack Manning. Recurring actors include: Sean Ringgold as Shaun Evans, Shenaz Treasury as Rama Patel, and Nick Choksi as Vimal Patel.
As you can see there are many returning actors/actresses that we love as well as some new ones. I’m sure we will fall in love with the revived AMC and OLTL. So go and enjoy the shows!
I am participating in a campaign from One2One Network and The Online Network. I have not received payment for this post. My participation makes me eligible for a prize drawing. All opinions stated are my own.