Jennifer Delamere is known for writing series, not just books. She writes several books that expand on each other keeping the reader invested and wanting more. The Captain’s Daughter is the first book in her new series London Beginnings.

We meet our main character, Rosalyn Bernay, quickly in The Captian’s Daughter. Rosalyn has not had an easy life. She grew up in Müller’s orphanage gave her an unstable upbringing. She was forced to flee to London and leave her position as a lady’s maid due to false accusations. Rosalyn found herself in London without a penny to her name, homeless and broken. Then she found the Opera. She landed a job backstage and worked her heart out falling in love with music and dancing all over again. 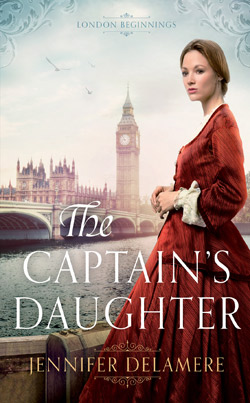 Our second main character is Nate Moran. His heart belongs to the military but he was injured and sent home from the army until he is fully recovered. He is miserable. He ends up working as a stagehand, filling in for his injured brother so he does not lose his job. While Nate is in town he is doing everything he can to help his family while counting down the days until he can rejoin his regiment.

Nate and Rosalyn become friends but you can tell Nate may want something more. For sure, the Moran family wishes him to fall in love with Rosalyn so hopefully, he’ll stay and not rejoin his regiment. But Nate seems to have been put into the dreaded friend zone. What will happen? Will Nate and Rosalyn become more? Or will Rosalyn fall in love with someone else? You’ll have to pick up a copy of the book to find out.

The Captain’s Daughter is filled with details from the period that make you feel like you are right there with the characters. If you’re a history buff you’ll love the references to Gilbert and Sullivan, H.M.S. Pinafore, the debut of Pirates of the Penzance, and Jessie Bond.

The Captain’s Daughter by Jennifer Delamere is now available online or at your local book retailer.

Connect with Jennifer Delamere online to be notified of new books in the series.